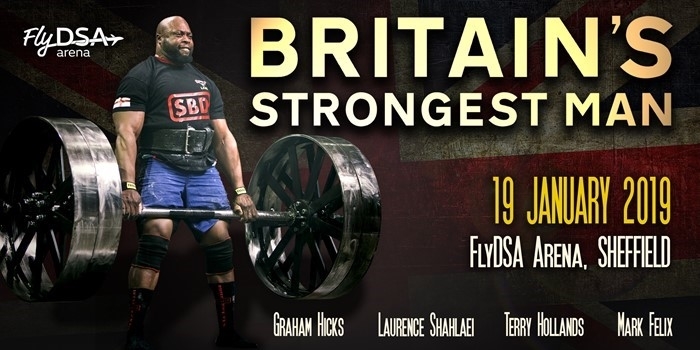 Giants Live returns to the Fly DSA Arena in Sheffield on 19 January 2019 for another action packed strength showdown!

This year, we have a truly awesome lineup of heavyweights ready to battle it out to claim the biggest prize in British Strongman, along with a golden ticket to World's Strongest Man 2019. Can Big Loz claim his 3rd Britain's Strongest Man title or will Graham Hicks finally break his duck and claim a much deserved win? Or will the evergreen Mark Felix shock everyone and become the oldest ever Britain's Strongest Man?

Join us at the FlyDSA Arena in Sheffield and witness what is set to be a truly epic show - stones will be lifted, records broken and 12 men pushed to their absolute limits in the ultimate test of strength.

This event is filmed for Channel 5 as part of the Official World's Strongest Man Qualifying Tour.

*Please note, due to the nature of the event, the line-up of stars is subject to change.