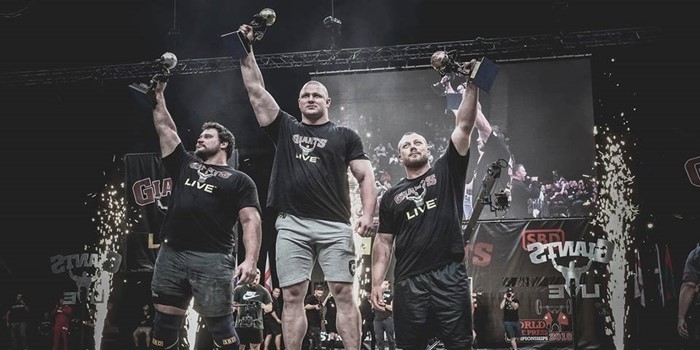 Giants Live returned to Manchester Arena on 15 September for the concluding event in the 2018 Tour – the World’s Strongest Man Tour Finals – and what a finale it was!

And that was just the beginning!

This weekend also saw the launch of a new online ranking and qualification system for the sport, at the direction of Eddie Hall. There’s never been a more exciting time for the sport of strongman, and like all good tales, the year deserved a closing chapter - one final crescendo to see out the year. The World’s Strongest Man Tour Final was that final chapter - in the colossal Manchester Arena, where axles were PRESSED (and PULLED!), cars were RACED, stones were THROWN, old legends battled onwards and new TITANS rose to the challenge.

11 men lined up to tackle 5 gruelling events, each one hoping to claim his place in the strongman history books. The line up included Mark ‘the Miracle’ Felix – still going strong at 52 years old, Konstantine ‘the Georgian Bull’ Janashia, hungry to better his 2nd place spot from last year and 4 x World’s Strongest Man, Žydrūnas Savickas, looking to retain his title from last year.

The first event in the show was the hotly anticipated World Axle Championships, where two main contenders had been tipped to break Eddie Hall’s 216kg World Record: Big Z, 4 x World’s Strongest Man (considered by many to be the strongest man that ever lived), and Iron Biby of Burkino Faso, the young rising star of strongman.

But Big Z was not on top form. To shocked gasps from the audience, he failed his first attempt at the 180kg press, but then composed himself to make a solid lift, following it up with a 195kg lift with just as much gusto and a thunderous roar from the crowd to match.

Ultimately, it was Iron Biby who came out victorious on the Axle after he was the only man to succeed with the 207kg press.

Encouraged by 7,000+ cheering fans in the audience, Biby then attempted the World Record 217kg lift, but, sadly, today was not his day.

Eddie Hall, commentating on the event from the sidelines, showed his respect to the young athlete for his valiant attempt in the only way strongmen know how, with a beast-sized pat on the back.

Eddie’s World Record is safe. For now, at least.

Big Z went on to tackle the following two events – a GIANT 360kg axle deadlift for reps – and a 225kg duck walk and anchor drag, but fans could see something was amiss. Bagging only 2 reps and a nose bleed on the deadlift, followed by a dramatic stumble putting him last place in the medley, this wasn’t the performance we were expecting to see from the legend.

Eventually, Big Z graciously admitted defeat and pulled out of the competition, explaining injuries were getting the better of him.

While Iron Biby, Big Z and Janashia seemed to be bookies’ favourites going into the event, it was Brit, Adam Bishop, Strength and Conditioning Coach for the Harlequins, and USA’s Martins Licis who were the dark horses on the night.

Bishop with a speedy 25.66 second win on the Medley Race and a solid performance overall came second place - a HUGE accolade for the Brit, his biggest event win until now being a 4th place at Britain’s Strongest Man. Maybe that Ugg sponsorship contract will be winging its way to him after all?

When you’re trying to conduct a serious interview with @adambishopstrongman and @eddiehallwsm walks in. 🙈 . . . Come see Bish and his glorious footwear in Manchester 👉 15 September 2018 – Manchester Arena - Tickets 👉 [link in bio]👈 . . . More behind the scenes action coming soon from @officialstrongman 💪

Martins Licis also put in an incredible performance, smashing out a staggering 8 reps on the 360kg Giant Axle deadlift in 60 seconds!

Going into the final event, there was just half a point between Kieliszkowski and Licis – so it was a nail biting finish on the Atlas Stones. Kieliszkowski just pipped Licis by 2 seconds with an astonishingly speedy 16.09 second Atlas stone run, confirming his victory and putting the American in second place.

Want to watch the whole show? The live stream of the event is available to re-watch online exclusively at officialstrongman.com.

The 2019 Tour kicks off on 19 January with Britain’s Strongest Man - and Eddie is looking to make it a record 6th title in a row! Don’t miss your chance to see strongman the way it was made to be seen – LIVE, up close and personal. Tickets are on sale now!